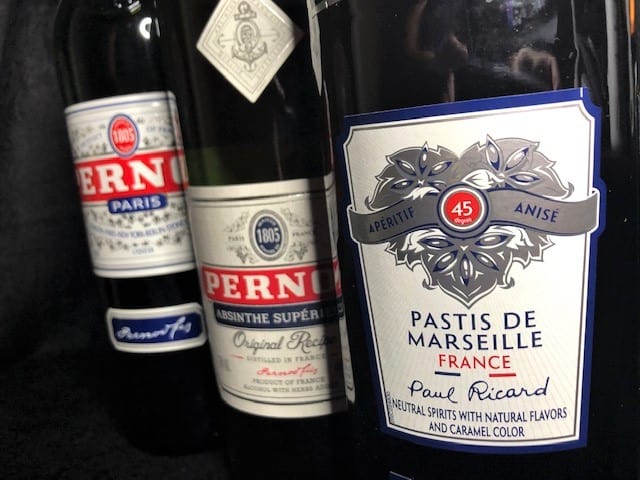 Absinthe, Pastis, and Pernod: What are the Differences?

It’s easy to confuse absinthe with pastis. The two liquors are often used interchangeably, but they are actually quite different.

Though both drinks have similar flavor profiles, there are some key differences between them to be aware of.

In this article, we’re going to look at the differences between absinthe and two other popular anise-flavored drinks: pastis and Pernod.

What is the Difference between Absinthe and Pastis?

The difference between absinthe and pastis lies in their ingredients. Pastis does not include grande wormwood like absinthes do, uses star anise instead of green anise, and includes licorice root. While both heavily feature anise flavors, that is where the similarities end!

While absinthe contains grande wormwood which gives it its distinctive taste and aroma, pastis does not contain grande wormwood since it was largely created as an alternative to absinthe. The differences in their ingredients influence the flavor and color of either beverage, with absinthe being clear and having a green hue while pastis is typically a type of amber, caramel color.

Absinthe is also typically between 50 and 70% ABV (or sometimes even higher) whereas pastis is lower in alcohol content at an average of between 40 and 45%.

Although both are high in alcohol content, pastis generally has a sweeter taste than absinthe. This difference is attributed to how it’s made: while sugar is often added to poor quality absinthe to make it more palatable, it’s a key component in uniting all of the flavors present in pastis.

However, absinthe and pastis can be generally be used interchangeably when it comes to cooking or some cocktails. After all, pastis and Pernod are both largely viewed as absinthe substitutes following the absinthe bans in the early 1900s.

The word pastis is derived from the Occitan (a language spoken in parts of southern France) word for “mash up.”

It is a type of aperitif that is characteristically sweet and licorice-flavored. It’s typically served by adding 4 parts water or club soda to 1 part pastis. Especially on warm days, it’s common to add ice cubes so you have a nice and refreshing drink to keep you cool!

Adding water to pastis results in the oils separating in a way similar to the absinthe louche. This is commonly referred to as “the ouzo effect” after a Greek anise spirit that does the same thing.

Pastis was first introduced in 1932 by Paul Ricard of the famous Pernod Ricard distillery.

The success of pastis showed that there was still love for anise-flavored drinks even nearly two decades after absinthe was banned. It’s still very popular today (especially in Marseille) and is the national drink of France!

Pastis is made by infusing a wide variety of plant materials like fennel and licorice root plus spices like star anise and cloves with alcohol. Some brands like Henri Bardouin Pastis (a personal favorite) proudly contain over 65 different ingredients!

This mixture is blended together with sugar syrup until it reaches the desired consistency and flavor. Coloring (usually a caramel color) is commonly added as well which gives it that deep amber hue. Some brands go a different direction, though, and offer pastis that is clear or light blue in color.

To get technical, pastis would be most properly considered a liqueur instead of a spirit like absinthe because of the sugar used in its production!

Pernod is another anise-flavored apéritif that was first produced by the Pernod Fils distillery (the other half of Pernod Ricard.)

It is typically served by adding water or soda much like with pastis. However, it’s not uncommon to see it mixed with other drinks like cranberry juice or Coca-Cola.

Pernod is made primarily of star anise and also includes ingredients like licorice root and fennel. Notes of mint and coriander form a very fresh taste on the palate.

Much like pastis, adding water to Pernod anise results in an “ouzo effect” that is very fun to watch!

You can think of Pernod anise as absinthe’s sweeter cousin. Much like pastis, the inclusion of sugar makes Pernod anise stand distinctly apart from absinthe as a liqueur and not a spirit. Unlike pastis, however, Pernod’s color is a brilliant emerald green.

Generally speaking, it’s safe to consider Pernod anise as a pastis. The difference largely lies in the drink’s history as Pernod Fils and Ricard were rivals until they joined forces to form the modern titan that is Pernod Ricard.

The distinction lies more within the brands’ recipes themselves and not the actual type of drink that they are.

Some may fiercely defend that Pernod Anise is not a pastis, though I have yet to find a compelling reason to justify considering it otherwise. Coca-Cola isn’t Pepsi, but they’re both still sodas!

At the end of the day, it’s more about what flavor YOU prefer.

Personally, I keep both stocked at all times. Generally, I prefer Pernod for mixing and Ricard (or Henri Bardouin if I can get it) for making a more traditional pastis with water.

I hope this article has helped you learn the differences between absinthe and pastis!

Pastis and Pernod may be somewhat similar to absinthe (since they were introduced as substitutes), but they are not the same thing.

Does that mean that pastis and Pernod aren’t worth drinking? Of course not! You just want to be mindful of the differences in flavor, preparation, and overall experience.

When you have absinthe, it’s meant to be appreciated for the drink of art that it is – so slowly sip your absinthe while appreciating its fine and elegantly subtle qualities (instead of slamming it with ice like pastis).

On the other hand, if you’re drinking pastis, enjoy its bold anise taste and licorice aromas.

So next time you’re celebrating National Absinthe Day, feel free to celebrate pastis as well! Let’s have no rivalry between these fair cousins!